New York State’s Climate Leadership and Community Protection Act (Climate Act) established an ambitious set of emission-reduction and green energy goals for the Empire State. It calls for an 85% reduction in greenhouse gas emissions by 2050, creation of a 100% zero-emission electric system by 2040 with 70% of the state’s electricity coming from renewable resources by 2030.

Significant amounts of wind turbines and solar photovoltaics are being installed throughout New York State in the transition to carbon-free electricity. But they can only generate power when the wind blows and the sun shines. As a result, energy storage is needed to make their power available whenever it is needed. To assure electric system reliability, long-duration energy storage is vital.

A NYISO study of New York State’s “70 by 30” target found that that transmission constraints would lead to curtailment of 11% of the total potential renewable energy production across New York, with curtailment levels in some regions as high as 63%. Along with enhanced transmission capability, long-duration energy storage can optimize New York’s ability to use its renewable power resources. However, most battery systems provide only a few hours of storage.

Quidnet is working to make long-duration energy storage a reality in New York and other parts of the nation. We are developing and deploying energy storage using the science of geomechanics and time-tested pumped-storage hydropower technology. Our system is modular, scalable, and terrain-independent, offering structural cost advantages, with lower per-megawatt installed costs than gas peaking plants and alternative storage systems. We’re reliable and ready, with equipment provided and serviced by mature suppliers from well-established industries. 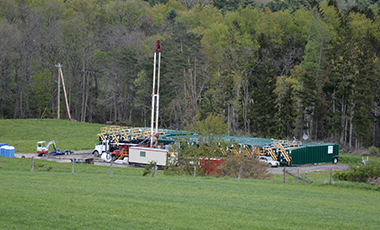 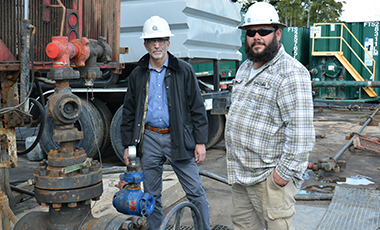 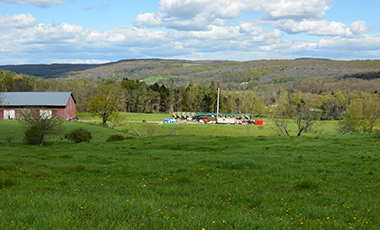 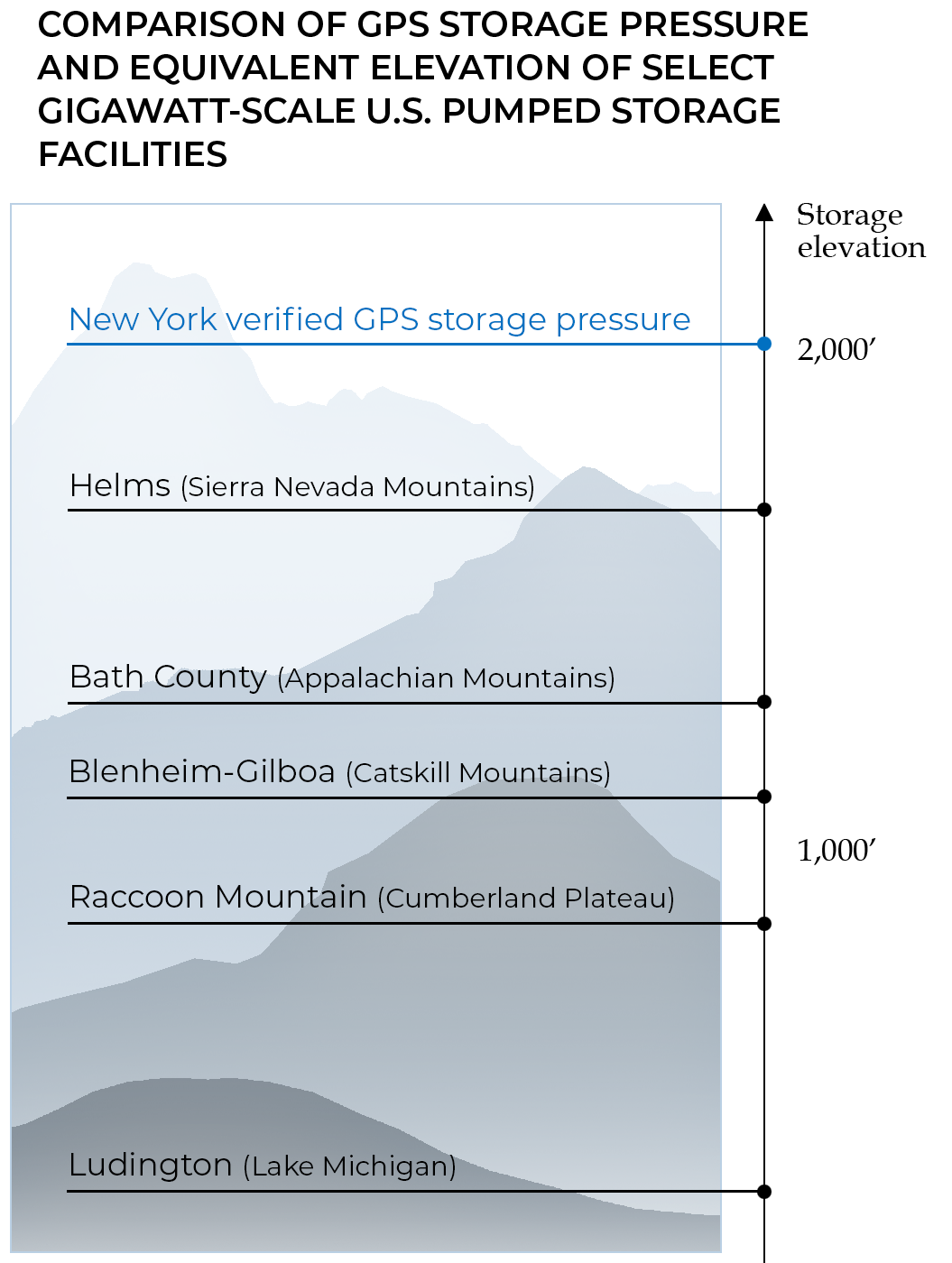 Quidnet uses the pressure found deep within the rock of New York as a natural resource that enables our innovative GPS technology. The level of this pressure is determined by the regional sedimentary conditions developed over millions of years of geological activity.

Roughly 480 million years ago during the Ordovician period, the tectonic plates comprising the modern-day continents of North America and Africa pushed into each other. The incredible forces from this convergence pushed up the Appalachian Mountains, a chain of highlands that stretch nearly 2,000 miles from the Canadian province of Newfoundland and Labrador to the U.S. state of Alabama.

Over the next 70 million years during the Devonian period, sediment shed off from these new mountains accumulated in low-lying clay deposits. This accumulation grew over millions of years until the buried clay hardened to become the sedimentary rock known as shale. 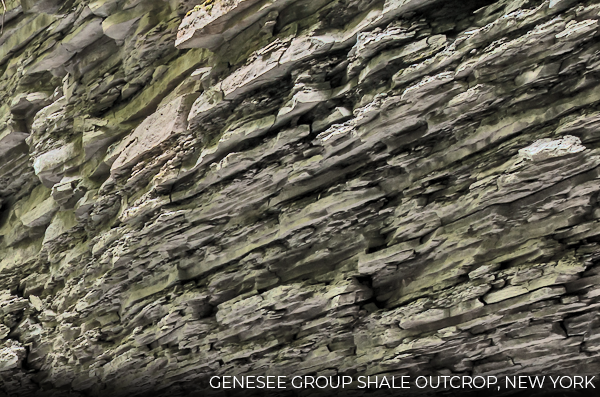 Shale is the most common source for hydrocarbons (natural gas and petroleum), in part because of the ability of this rock to seal away vast pockets of mineral wealth. This same characteristic – known as “impermeability” – makes it ideal for storing pressurized water without leaking. The thick sequence of shales that make up the Appalachian Basin stretch from parts of New York, as west as Ohio, and as south as Georgia.

The first natural gas well in the United States was dug in New York state in 1821. Existing drilling data from two centuries of petroleum prospecting provides Quidnet with an abundance of data that helps our geologists identify target locations for the deployment of Quidnet’s GPS energy storage solution. The rock in each site location must have suitable subsurface conditions and contain no unwanted hydrocarbon content.

Through testing, Quidnet has verified that the storage pressure of the rock in the Appalachian Basin is substantial. To build a traditional pumped storage facility with equivalent water pressure through gravity alone, the water would need to be pumped into a reservoir 2,000 feet up a cliff. Quidnet's GPS provides the energy generation capacity of pumped storage on a smaller footprint and independent of terrain. 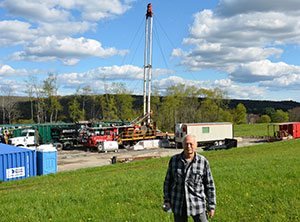 As a landowner leasing property to Quidnet for their Oxford, New York project, I’ve been impressed with the professionalism, courtesy and respect demonstrated by every person I’ve dealt with at Quidnet.

My experience has been very positive. They’ve done everything they said they were going to do and have been very responsive to issues that arise from time to time. They even briefed the Oxford Town and Chenango County Planning boards, both of whom are very supportive of the Oxford project and excited to see what it bodes for our future.

The New York State Energy Research and Development Authority (NYSERDA) and the U.S. Department of Energy (DOE) are among the state and federal investors in Quidnet Energy’s innovative energy storage system.

As part of NYSERDA’s High Performing Grid Program, which makes investments in research and development that accelerate the realization of an advanced, digitally enhanced and dynamically managed electric grid, the authority awarded Quidnet Energy a contract for commercial demonstration of its GPS technology.

Quidnet partnered with DOE’s Water Power Technology Office through its HydroWIRES Initiative to develop an innovative reversible injector-generator that will enable deployment of modular hydropower conversion in high-pressure pumped hydro applications such as Quidnet’s GPS technology.

Quidnet is also working with Advanced Research Projects Agency–Energy (ARPA-E) through their Duration Addition to electricity Storage (DAYS) program to develop the GPS resource in key power markets across the US by planning and executing exploratory wells to characterize, evaluate, and validate the geologic resource, including inactive oil and gas well sites.